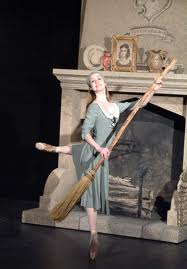 Cinderella is a ballet, Op. 87, composed by Sergei Prokofiev to a scenario by Nikolai Volkov. It is one of his most popular and melodious compositions, and has inspired a great many choreographers since its inception.  The piece was composed between 1940 and 1944.  Part way through writing it he broke off to write his opera War and Peace.  The premiere of Cinderella was conducted by Yuri Fayer on November 21, 1945, at the Bolshoi Theatre with choreography by Rostislav Zakharov.